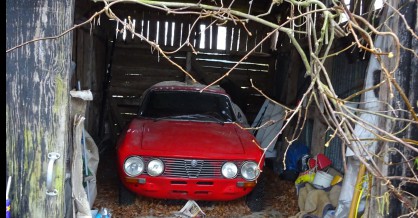 However they tend to lose some of the romance when pulled out of their barns. Now a Danish barnfind is being sold at auction directly out of the barn where they were discovered, romance and rust completely intact.

The settings could not be more right: You drive to the site of the barn along beautiful, winding idyllic country roads, which are found only on the island of Funen. Known as The Garden of Denmark and where world famous poet and author Hans Christian Andersen was born, the road trip in itself is a small adventure.

And then the old farm buildings suddenly presents themselves and the story unfolds: Telling a story of better times that are now over. In the good times the German architect and builder Rudolf Steiner collected cars, and one by one brought them home from Germany and the GDR over a period of approximately 20 years.

Rudolf owned agricultural property in Faaborg and used it as his summer residence, and all the cars were brought here. They were parked first in the former cow barn and later in several other buildings, and as the collection grew they were placed more and more a little helter-skelter.

Unfortunately Rudolf was declared bankrupt and his agricultural property was sold with all fixtures and personal property, including the approximately 30 cars. Some of the cars are now very rare - which to some degree counters for the fact that they do not all have papers nor keys.

What they are not lacking is romance: The auction house therefore decided to leave all as it was found, and viewing of the cars is at the venue itself. Many Danish enthusiasts have traveled to see the site to experience the feeling of a very genuine barnfind themselves.

The cars themselves represent a quite wide range of types, nationalities and periods: Alfa Romeo, Renault 5 Turbo, early Opel Manta, Fiat 128 3P, Mazda RX7. And the appearance of a Trabant in the shadows and motorbikes where they fit in speaks volumes of an enthusiast with a broad taste - see the below list HOW broad:

All cars, motorcycles and engines will be sold to the highest bidder with no minimum price.